Sandblast rally takes place in early March every year in Cheraw, SC and although not the first event on the NASA Rallysport calendar, is the first non winter rally in the US every year. There is always a little extra excitement in the air around this event as everyone gets to shake off the cabin fever of a long cold winter and show off all their shiny new toys! Sandblast will always be special to me as I got my first rally experience at Sandblast 3 years ago and thanks to some amazing people in the rally community have been on one crazy adventure after another ever since! To that point, who am I?
Hello GotCone readers! My name is Brian Katz. I am an engineer out of Chattanooga, TN by day and amature race car driver and mechanic by night. My normal rally gig is crew for River City Rally Team. Our driver and fearless leader Michael Hooper introduced me to rally with a trip to Sandblast and since that first trip 4 years ago that ended with two broken e30’s, we have traveled all over the country, winning a NASA eastern 2WD championship in 2015, and a Rally America central region 2WD championship in 2016! Last season Hooper decided a new weapon was needed to chase national level trophies. Given his experience with Toyota products and our desire to build something unique, we decided to build the first Lexus IS350 rally car! Beverly debuted last season at Black River Stages and won the 2 wheel drive class! Rally in the 100 Acre Wood will be our first event of this season as a team and we are hard at work finishing preparing for another exciting season, join now and start playing online today!

The decision to skip Sandblast left myself and the other RCR team members an opportunity to step out of our normal roles and enjoy a different side of the rally experience. I decide to take the opportunity of not having a car to look after to try my hand at photography, something that has always interested me but I usually don’t have much opportunity to photograph any of the action as my first priority at the event is making sure the car is ready to compete. My trip began at 4 a.m. Friday morning as I was riding down to Cheraw with our RCR co-driver Claudia Barbera-Pullen and she needed to be in town early to meet her team and prepare for shakedown. You may recognize Claudia from any of her other rides she has taken across the rally world over the last few years and the several podiums she has appeared on. This event she had been invited to sit with Joseph Burke in his first event in 5 years and his fresh Evo IX build from JRD Rallysport. If you have the chance to check either this build or their Escort build, highly recommend you do as they do some amazing work! 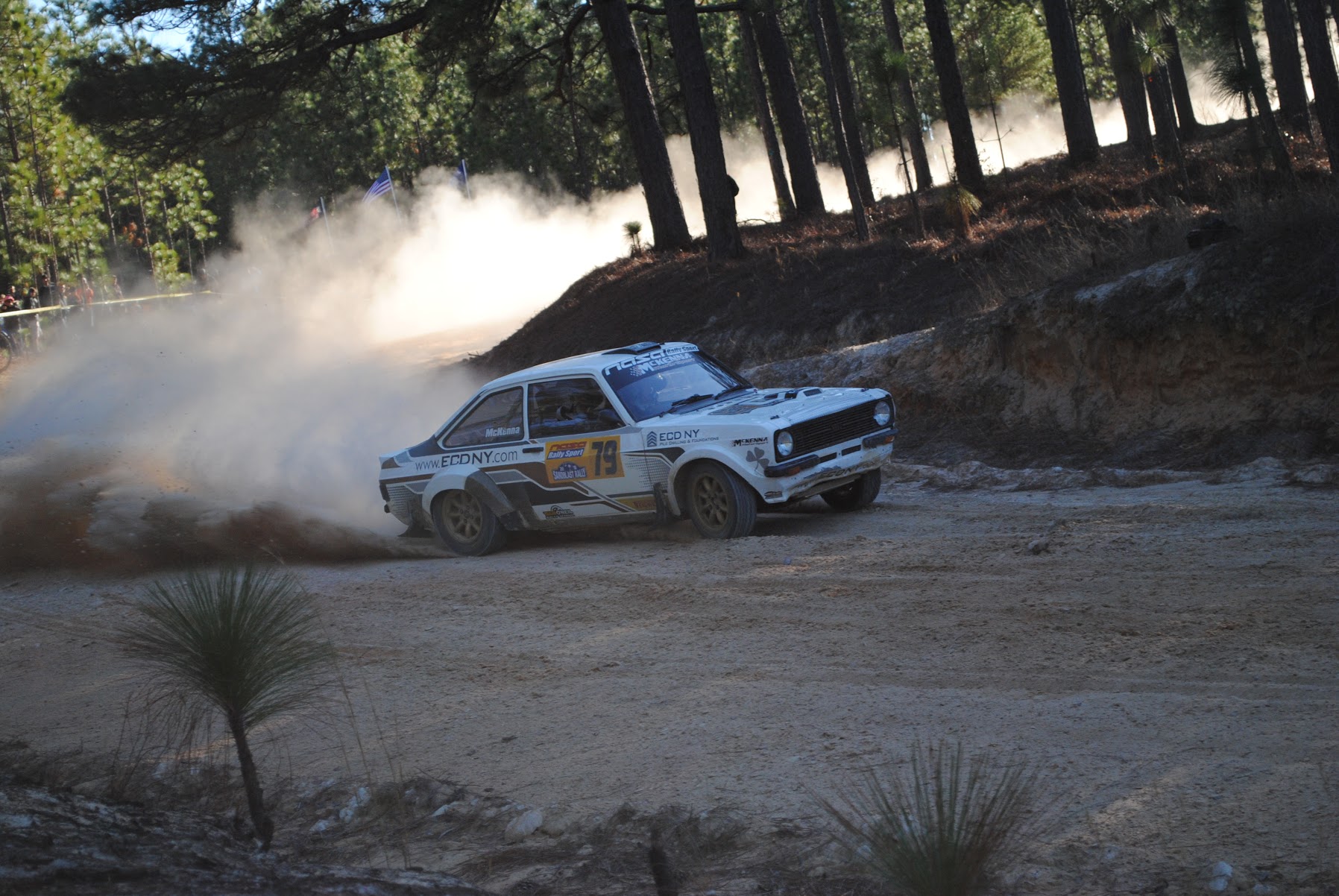 Saturday morning, race day! We woke to typical Sandblast weather, just hovering above freezing as the sun rises, looking forward to a beautiful sixty degree day. A welcome change from the long cold winter! The low sun rising over parc-expose made for some beautiful shots of the cars but presented a challenge as everyone naturally faces away from the sun.After seeing the Moto guys off the start, Ashley who’s boyfriend Justin was staying in the house with us, and I headed off toward the service area, down the road in Patrick, SC to drop the service rig off for the day before heading out to the stages to spectate. Well, that did not go as planned. As we dropped the van off, we got calls that both Justin and Orion, another friend staying with us were out on stage one and needed to be picked up. Justin had gone down and was unable to continue with a shoulder injury and Orion’s bike had seized up, stranding him just a few miles down the road from Justin. We headed off toward the spectator point on stage one hoping the marshal would let us enter there after sweep to head back and pick the guys up. Upon arrival we found the marshal and another volunteer for the event working the area from atop this awesome elevated party porch type of situation! They invited us up and after explaining our situation, I took advantage of the vantage point to get my first action shots of the event!

Unfortunately, all of the bikes and the first half of the car field had already past. I was able to get some cool shots anyway, the first cars passing had caught each other on stage so I had the rare opportunity to capture a pass attempt! After all the cars and sweep had gone past, we headed up the stage to find Justin and Orion. They were in good spirits despite the frustration that must have accompanied an exit of the rally on stage 1. As we arrived we received news from Claudia that she and Joseph had won stage 1 by over a minute! She was in as much disbelief as anyone who saw the times! We loaded up the bikes and hauled them back to town. When we arrived at the house we realized no one had a key and the doors were all locked. After looking around for a minute, I heard Justin call from the side of the house, “Katz! You’re the smallest one of us, right?” Fortunately, the guys had found an open window! Unfortunately, Justin was correct, I was the smallest. Orion gave me a boost up to the window and as I was climbing in, my foot caught on the window sill and I started falling backward into the dining room floor! Thanks to Orion’s lightning quick reflexes, he was able to grab my feet and keep me from falling head first into the house! Thanks buddy! Before getting turned around to head back out to the stages, we got a call that Flake was at the end of stage 3 with fuel in the oil of his bike. His day was done! We headed out to pick him up, arriving to find out he had crashed hard but continued on to finish the stage! We hauled his bike back to service, stopping on the way back at Bigs Meats & More on Hwy. 151. If you’re in the area, they are definitely worth the stop for an awesome burger or sandwich! 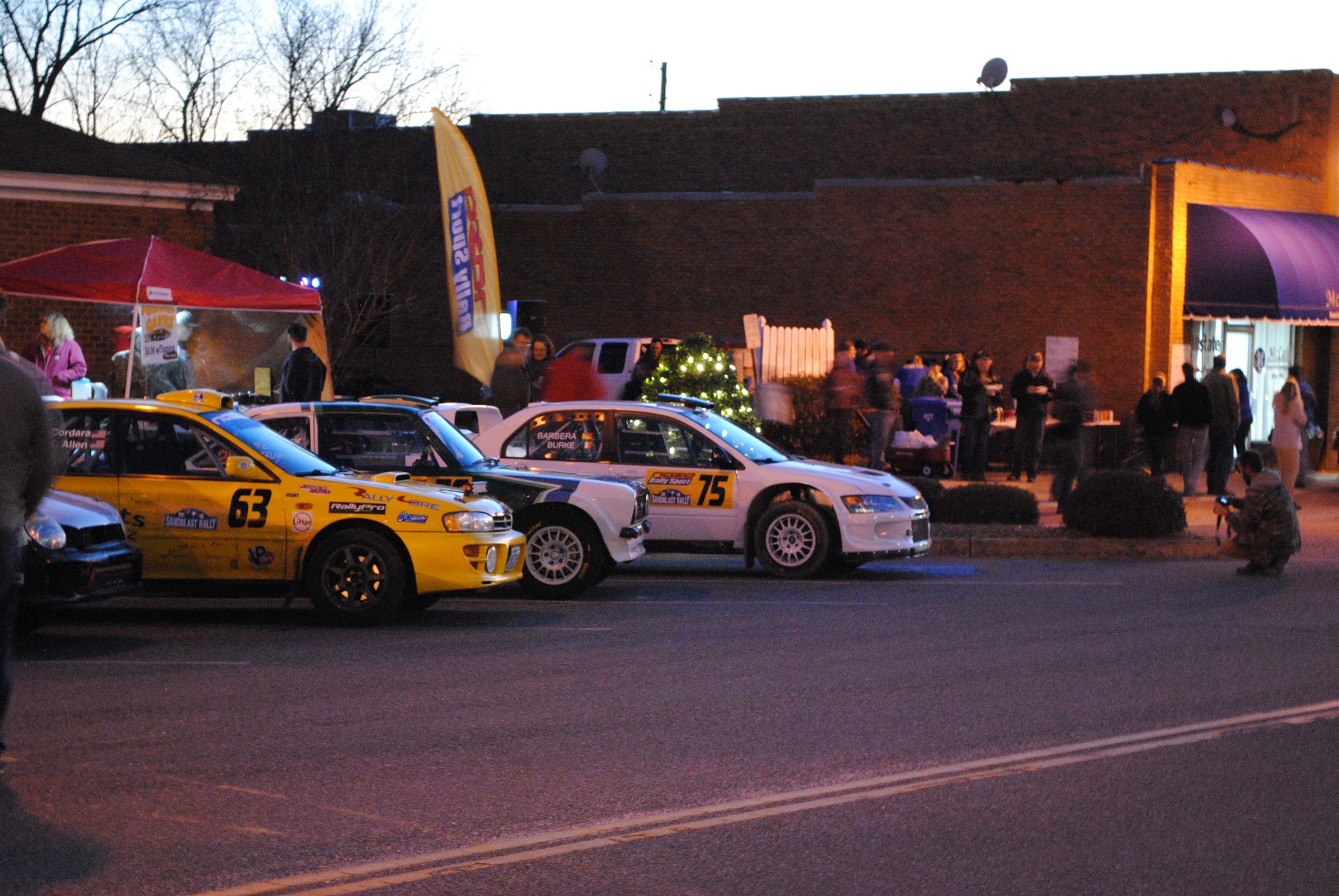 We finished lunch and headed back to service to drop off Flake’s bike. We arrived at service to find Ray, the last of our group still running tending to his bike, preparing to return to the stages. He had suffered a pretty hard fall but was still running. His determination would lead him to an 11th place finish at the end of the day! Claudia was also in service asher car was out with suspension damage from hitting a large hole on stage. Her day was done. Looking around service area and seeing all the carnage, I am reminded of how tough of a rally Sandblast is. The soft sand is deceptive and absolutely eats cars and motorcycle riders!

Often, just finishing earns a competitor a solid finish. As the team’s finished up service I rounded up everyone who felt well enough for a little more adventure and headed out toward the final stages and get as many action shots as I could. We found some excellent vantage points at the spectator points on stages 6 & 8. The sun set just as the cars finished passing us on the final stage and we headed back Cheraw for the awards ceremony and party. We were welcomed to the party by fried chicken and beer courtesy of Ponysaurus Brewing Co. Stories of adventures and events of the day were passed around with old and new friends as winners sprayed champagne and everyone celebrated those who had finished Sandblast 2018! 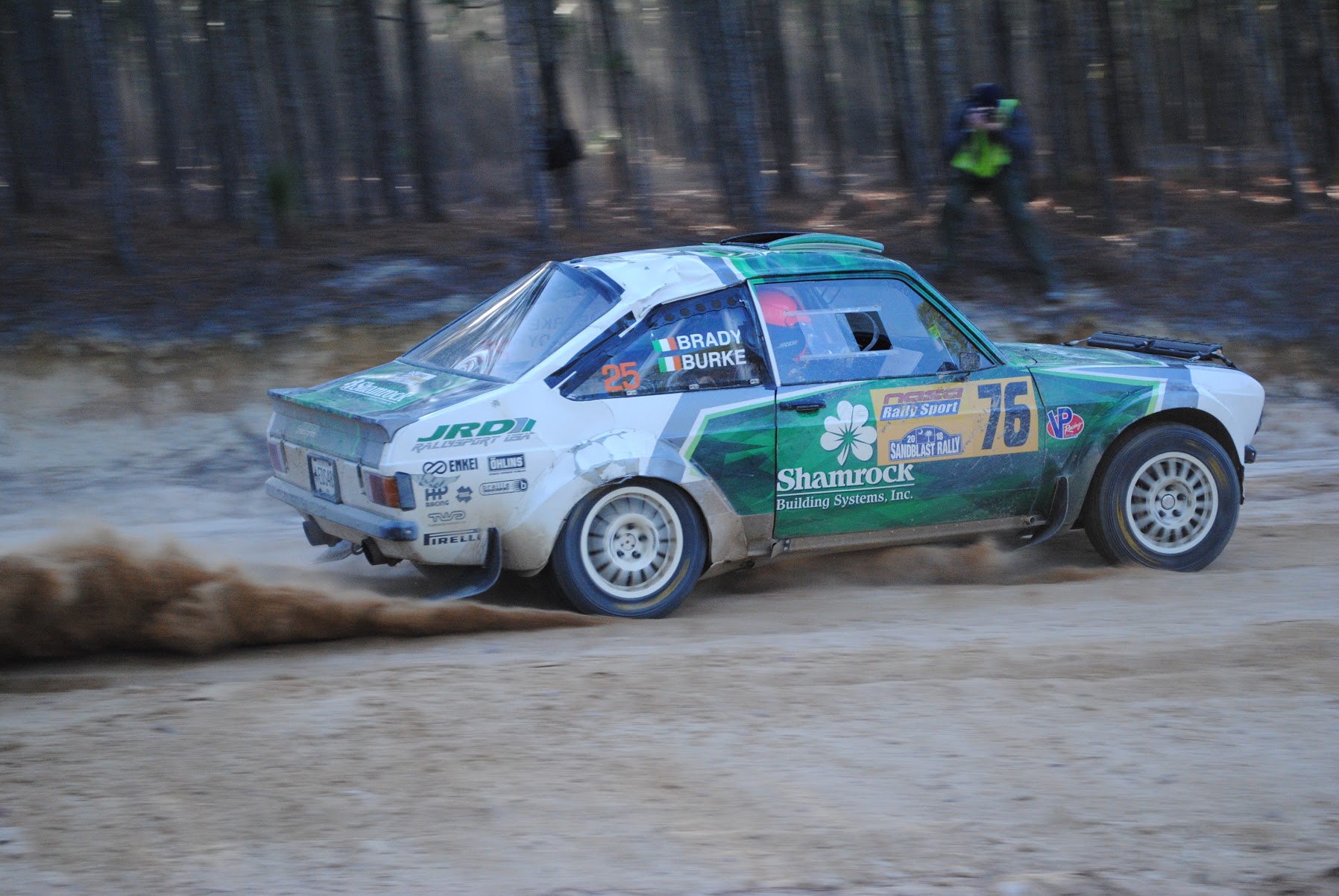 The whole weekend was a great time, and I honestly can’t even tell you who won. You can check NASA Rallysport’s website for that information. I’m really not a writer and having a little trouble coming to coherent conclusion. I think what I would like readers to take away from my rambling about my weekend adventure is, if you are any sort of motorsports fan, go check out a rally! Attending a rally as a spectator is an
adventure in itself, chasing the rally around all day from one spectator point to the next. So get out to your nearest rally! Go as a spectator, volunteer to work on the stages, or volunteer to crew for someone competing in the event! All are great ways to experience the one of the purest forms of motorsport on the planet and seeing various kinds of motorbikes such as Street Bobs. Man and machine tearing down a forest road. There is nothing else like it and everyone leaves the weekend with their own unique story to tell.