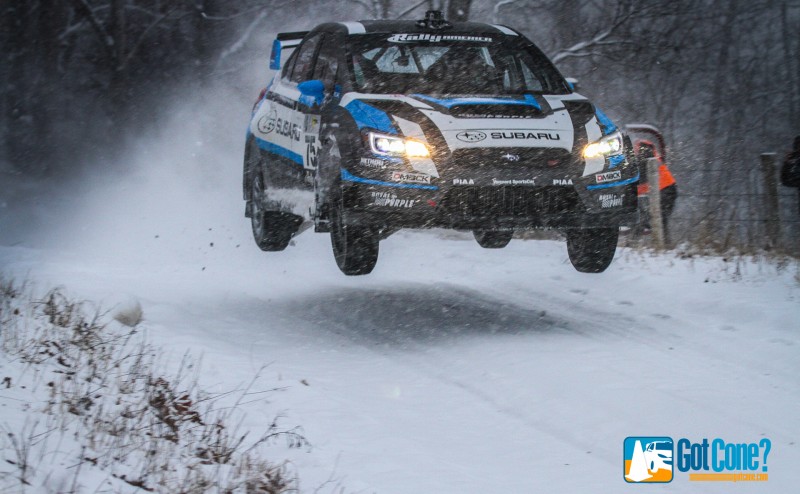 When you think about the Rally in the 100 Acre Wood, immediately visions of fast sweeping gravel roads pop into your head. It’s no wonder that it’s one of the most popular Rally America events of the year. This year was set to be no exception with 65 entries, but Mother Nature had her own plan. With snow and ice already on the ground, bitterly cold temps moved in for Friday morning. Shakedown started at 8 AM and the temp on my BMW 128i’s dash read 3 degrees Fahrenheit. Why had I got up at 5:30 AM for this, I thought to myself as I pulled on my Columbia snow pants over top of my jeans to try to stay warm. Then as I wandered down the ice covered gravel road towards a tight corner at the top of the hill I remembered just how beautiful the forest was at this time in the morning. It was quiet and peaceful and soon to be filled with the glorious sound of rally cars tearing through it. 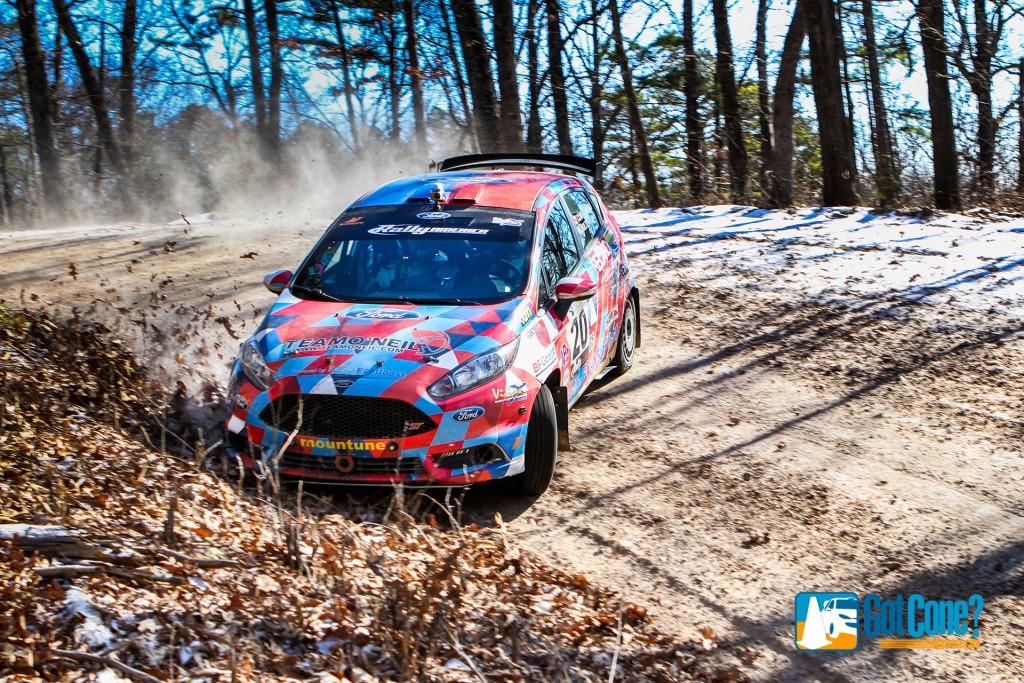 Only a few cars had decided to get some practice on the Shakedown stage on Floyd Tower Rd. This surprised me greatly, I would’ve thought everyone would want to get some practice on this unknown surface. Maybe the risk of damage was too great? But why not go at 80% and get a good feel before going at 100% in just a few hours? As the corner I was at for my next stop on stage 2 would show, the practice would’ve done them some good. The cars that did show up, made the most of it, getting multiple passes up and down the road. Andrew Comrie-Picard, Lauchlin O’Sullivan, and Piotr Fetela all put on a fun show, that got me excited for what the rest of the day was to bring. 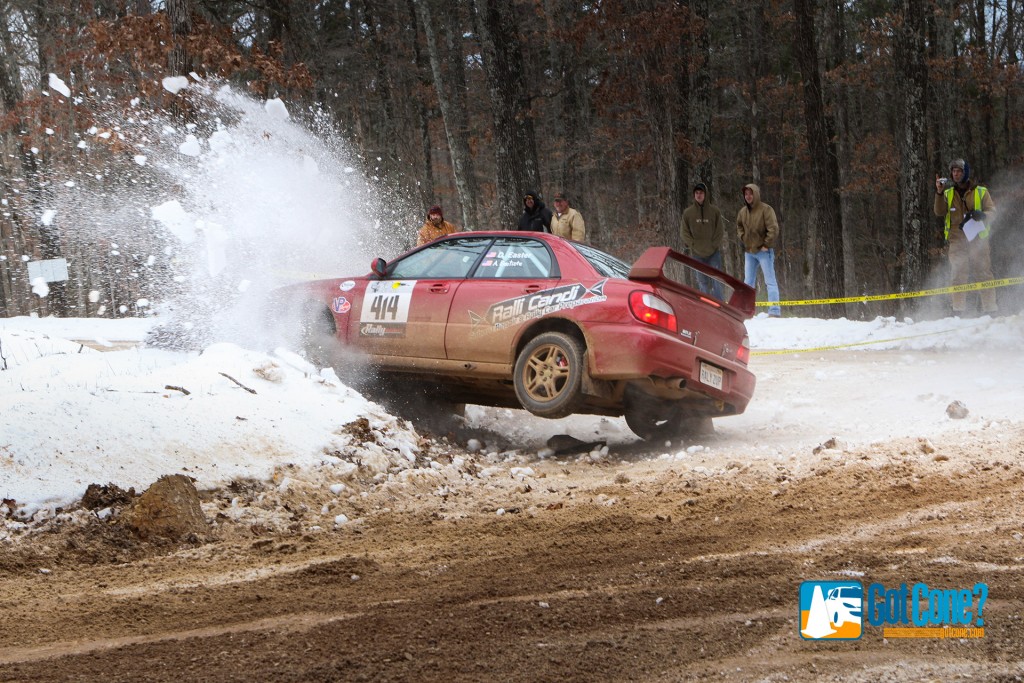 Shakedown wrapped up and I headed towards Stage 2. I got there plenty early and scoped out the area. The tight corner, where the road split in two, was at the end of a pretty long downhill straight. There was a large pile of snow and ice in the middle triangle of the intersection making it a tricky turn to judge. Just as I thought many drivers had issues getting slowed down enough. A couple went past the caution tape blocking off the other road and a few more hit the embankment on the outside of the turn, some hit it harder than others. There were also a bunch more who took it just right. It really was a corner where slower was faster. 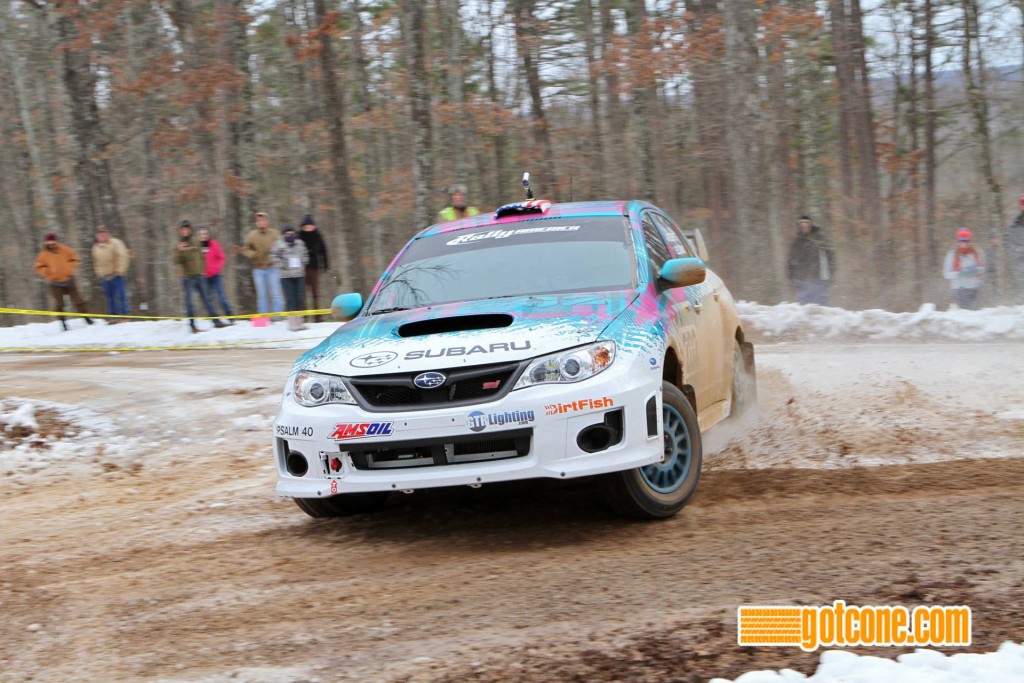 Even with all the mistakes at my corner, each car was able to continue on, but not everyone made it all the way through the stage. Nick Roberts and Rhianon Gelsomino suffered a mechanical failure that caused them to not be able to finish the stage and they were forced to retire from Friday’s stages. They were able to restart under Super Rally on Saturday, but once again suffered a mechanical failure and had to retire from the rally for good early on Saturday. 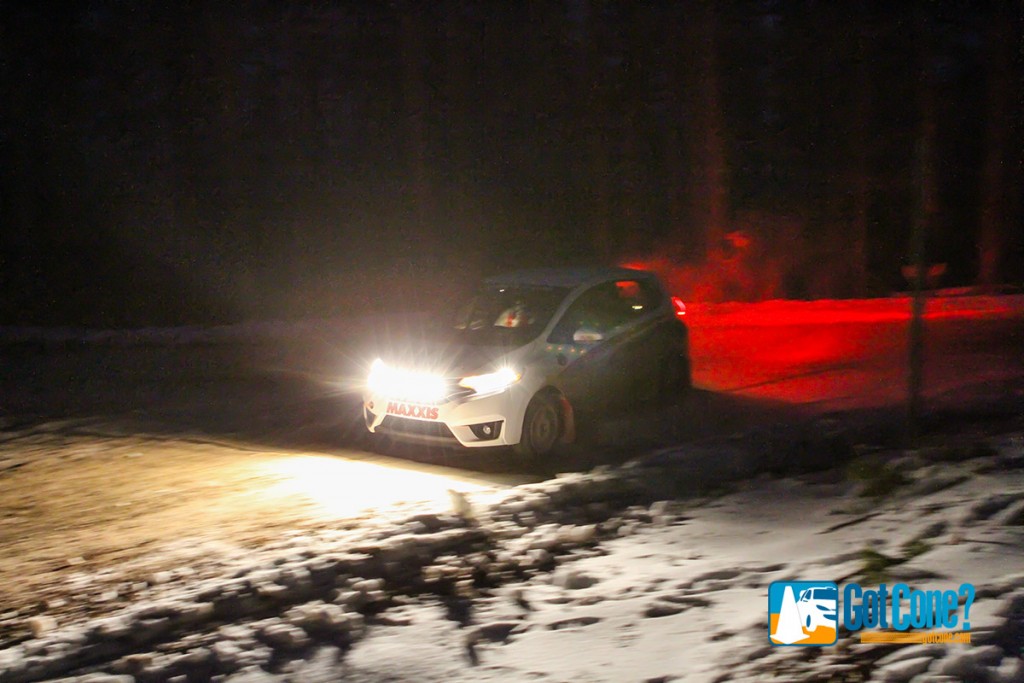 I decided to stay where I was and wait for Stage 6, which was on the same road. The stage started about 20 minutes behind schedule and it got dark fast. It’s always a fun time seeing the lights coming down the road as you hear the car roar through the forest. If you’ve never been to a night stage, I would highly recommend it. 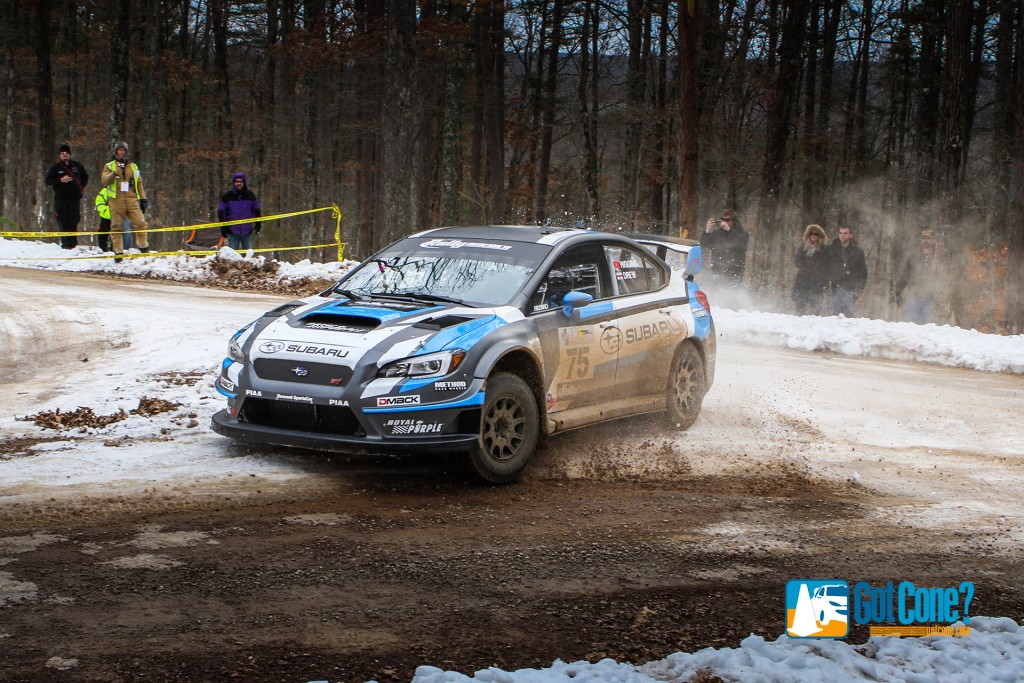 Saturday ended with David Higgins, Craig Drew and Subaru Rally Team with a commanding 4 minute lead over David Sterckx, who had another 4 minutes over 3rd place and Piotr Fetela. FY Racing’s Adam Yeoman and Jordan Schulze had been forced to retire after a fire started in their engine bay earlier in the day. 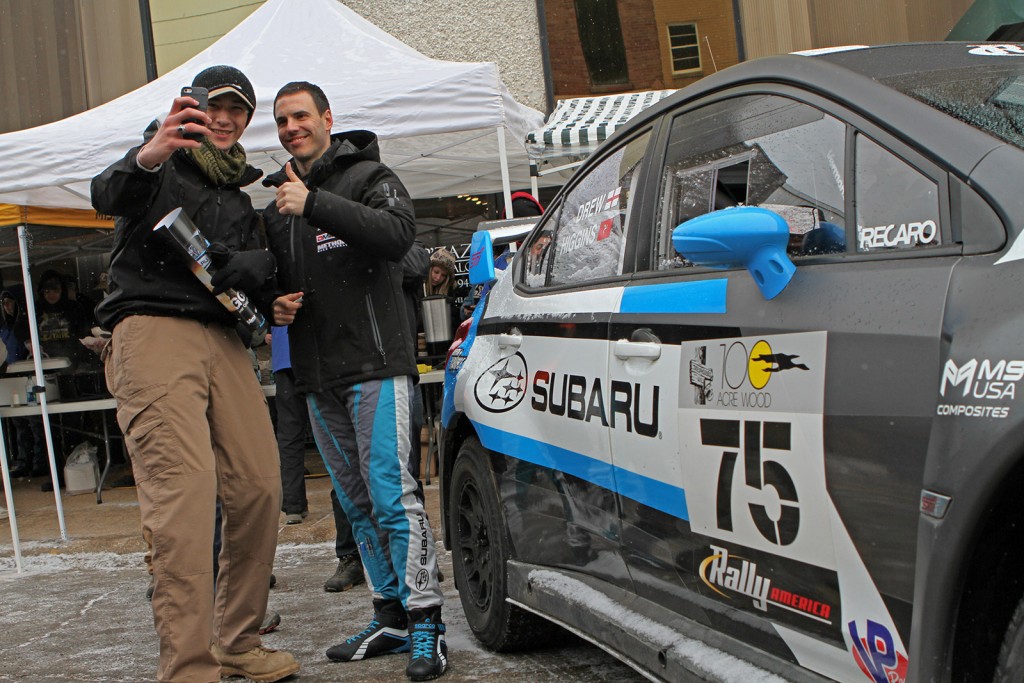 Saturday always kicks off with Parc Expose in downtown Salem, MO. The event always draws a big crowd of people and even the snow and cold wouldn’t keep the people away. Parc Expose is a great opportunity to meet drivers/co-drivers, get autographs, buy some merchandise and hang out with a huge group of people who love rally just as much as you do. 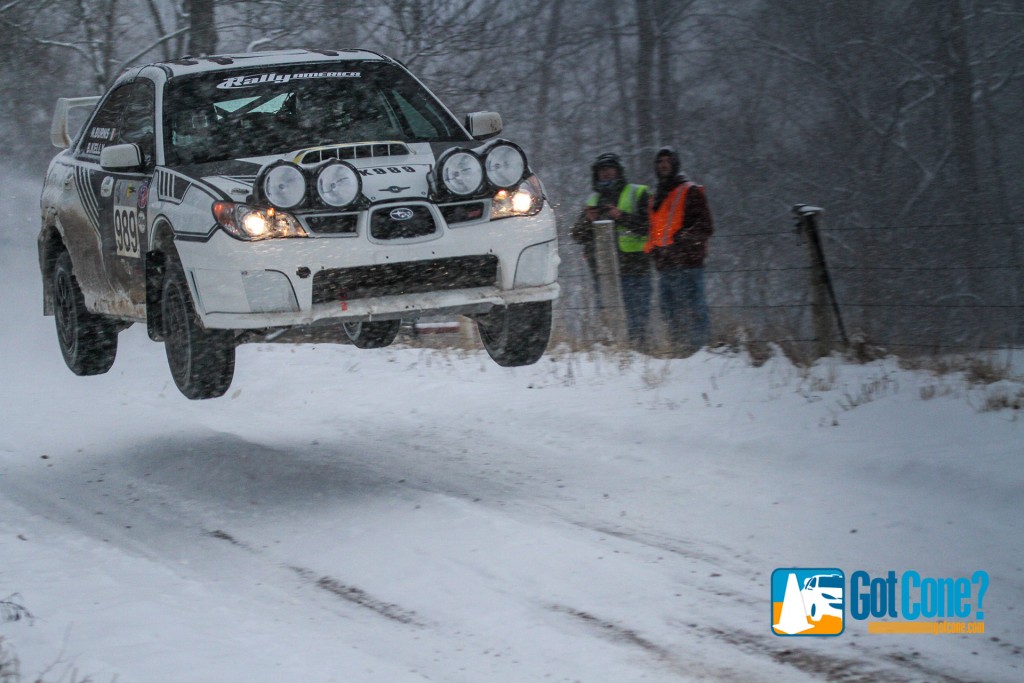 After Parc Expose, I decided to head out to the most famous jump in the USA, the Cattle Guard Crossing jump. The snow was just starting to fall when I arrived and it kept falling and falling. The mostly clear road soon became covered in snow as the stage was delayed for almost 2 hours. Stage 13 had to be cancelled after ambulance service never arrived on scene and a decision was made to cancel all stages after Stage 15. The cars transited from 13 to 14 and I wondered just how hard they would hit the jump with 2-3 inches of snow now covering the road. Most of us had been waiting in the falling snow and freezing temps for 4-5 hours to watch the spectacular flying rally cars. I was cold, tired and hungry by the time the cars started down the stage, but I wasn’t going to miss this. First through was David Higgins and Craig Drew in their new widebody 2015 Subaru STi Rally car and they didn’t hold anything back, flying through the air past us. However the award for longest jump would either go to Fetela Rally Team or Brenten Kelly and Niall Burns, both got some massive air. 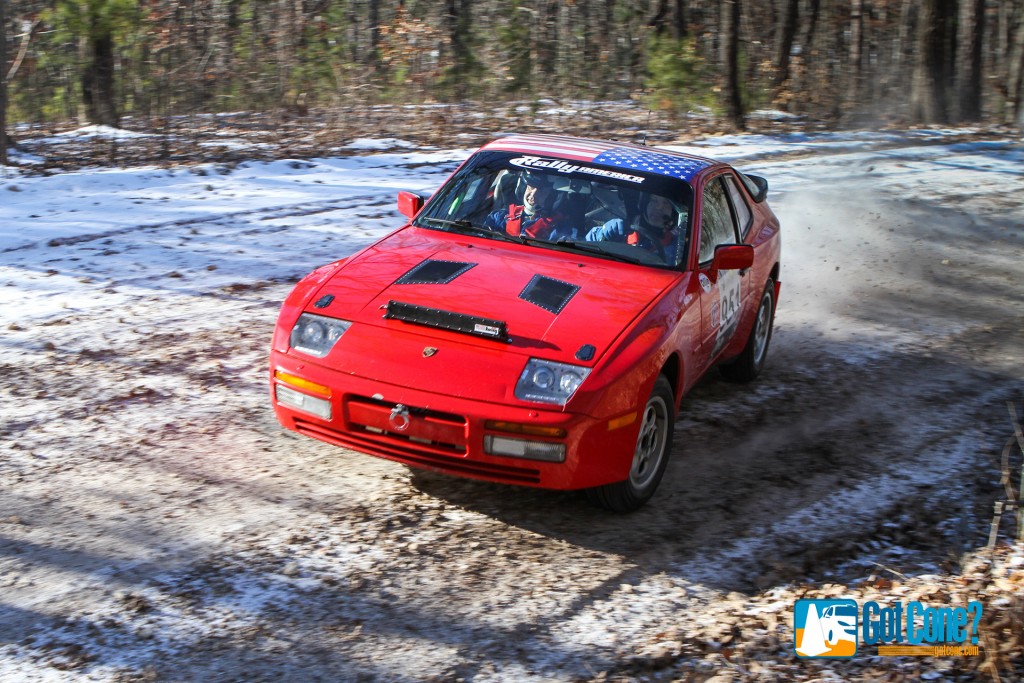