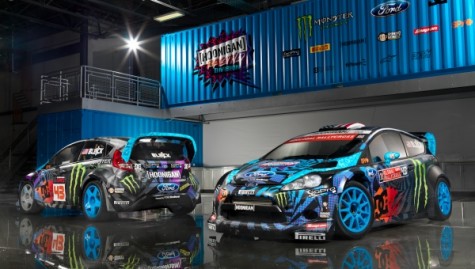 Ken Block unveiled the Hoonigan Racing Division yesterday, taking the place of his previous Monster World Rally Team. Block also unveiled the livery that will be on his Ford Fiesta for 2013. The livery is inspired by his love of ’80s and ’90s skateboarding. Block said, ““I’m stoked on how this livery and overall team aesthetic has turned out this year. With the name change to Hoonigan Racing Division, we wanted to take the look in a slightly different direction, one that has been inspired by my love of 80s and early 90s skateboarding graphics, as well as Miami Vice-era offshore powerboats and a dash of hair metal and old school hip hop mixed in for good measure. Much like we did in our years as MWRT, we’re continuing to try and lead and innovate in the motorsports marketing arena with this livery.”

Block also released his plans for the 2013 season. He plans on competing in the complete Rally America National series, the Global Rallycross series and the newly founded Global X Games competitions. For all those wondering if Block has given up on WRC, he said he hopes to compete in as many events as he did last year, three. I would count on an appearance at WRC Mexico, even though he doesn’t specify which events he would be competing at. It also looks like there will be another Octane Academy this year.