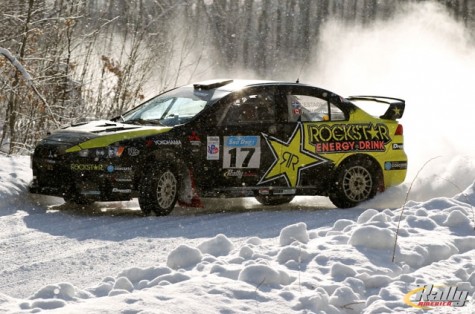 The 2013 Rally America National Championship season kicked off in Atlanta, MI at the Sno*Drift Rally. As the name implies there was plenty of snow and ice to cause for some difficult road conditions which set the stage for a classic dogfight between Antoine L’Estage and Nathalie Richard’s Rockstar Mitsubishi EVO X and the reigning Rally America National Champion David Higgins and Craig Drew’s Subaru STi. After swapping stage wins and the lead multiple times on Friday, Higgins took a half second lead into the 2nd day. Higgins managed to hold on to his lead all the way through the 2nd day until the final stage. L’Estage pushed hard on the last stage and took the stage win by 7.6 seconds which was enough to surpass Higgins and take the victory.

“Those stages were maximum attack,” said L’Estage, “After we saw the time we gained on the (previous) 15 mile long stage we decided to go for it. Everything connected and we ended up winning.” 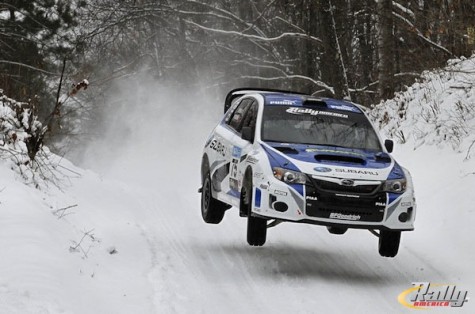 Crazy Leo Urlichich and co-driver Craig Williamson took the final podium spot in their Cam Jam Subaru STi. Ken Block and Alex Gelsomino also made an appearance, but suffered an electrical issue after a rock hit the alternator on their Hoonigan racing Division Monster Energy Ford Fiesta early on Day 1 and they were forced to restart under super rally rules on Day 2. Block was able to battle back for an impressive 6th place finish and taking stage wins on 6 of the 12 stages on the second day.

Evan Cline took the victory in Super Production over Mason Moyle. Cline and co-driver Jake Blattner lead SP from start to finish in their Exedy Clutches Subaru. Andrew Comrie-Picard and Jeremy Wimpey piloted their Scion XD to the victory in the 2WD class over Dillon Van Way and Andrew Edwards’ Ford Fiesta.